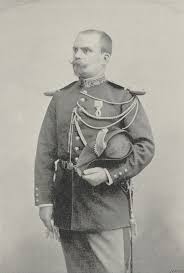 He was born the son of Phillipe Parès, who for many years was solo clarinetist of the Garde Republicane Band. His studies of music commenced at a very early age. He was an outstanding student at the Paris Conservatory, winning first prizes in composition, cornet, and harmony, which he studied under Theodore DuBois. His composition studies were taken with Leo Delibes.

Parès enlisted in the Artillery Regiment Band of Vincennes at the age of 20 and a year later won a competition for the position of assistant bandmaster in the army. He was then assigned to the 74th Infantry Regiment Band in Rouen. Two years later, he placed first in another competition, this time for bandmaster of the 69th Regiment Band in Nancy. Within a year, a special selection was made for the post of director of the Toulon Navy Band, and again Parès was first. He led this band, La Musique des Equipages de la Flotte de Toulon, from 1883 to1893.

In 1893, he was appointed director of the top French band, the Garde Republicaine, and he held this position until retiring from military service in 1911. During his term with the Garde Republicane, he led the band on tours all over the world, including the St. Louis World's Fair in 1904.

In 1917, Gabriel Parès was called back to the service of his country by Georges Clemenceau, president of France, and was asked to form a band to tour America to promote Liberty Loan Bonds. This group visited one hundred American cities and towns.

Parès was an accomplished composer; his output included many types of works. He also transcribed a large number of symphonic works, and many are still available in France today. He was honored with the decoration of Officer of the Legion of Honor.