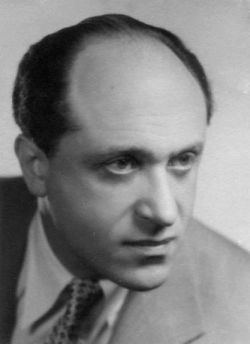 Born to a Viennese Jewish family in which his father was a physician, Frederick [Fritz Siegfried] Piket grew up in Vienna, where he began studying violin at the age of five. By his late teen years he had hopes to pursue a musical calling -- principally as a conductor. His father, however, like many middle- and upper-middle-class Jewish parents who viewed the professions as more likely than music or the arts to provide security and social stability, insisted that his son attend medical school. After succumbing to his father’s pressure and studying medicine halfheartedly for about two and a half years, Piket aborted the course and determined to follow his musical instincts.

Between 1924 and 1929 he attended the Vienna State Academy of Music, where he studied piano as well as music theory, counterpoint, composition, and conducting. Together with his first wife, he relocated to Berlin in 1930. Meanwhile, he conducted for opera and operetta productions at several local opera houses or companies in Germany, Austria, and Switzerland; and he held related posts as Kapellmeister. In Berlin, beginning in 1931, he studied composition with the celebrated composer and pedagogue Franz Schreker in summer master classes at Berlin’s Musikhochschule. And in 1931 he was awarded the Mendelssohn Prize, which he shared with Kurt Fiebig.

Like many Jewish émigré musicians in the 1930s and 1940s who were essentially refugees from the Third Reich and the war in Europe, and who became attracted to Jewish music in the United States, Piket had not been involved in synagogue music -- nor in the synagogue experience -- before his American years. His interest in synagogue composition began after taking a position as an organist and as music director of the White Plains Jewish Community center in the early 1950’s. Subsequently, Piket worked as a composition instructor at Hebrew Union College, and served on the faculty of the Hartt School of Music and New York University. Piket valued original self-expression over a collective historical approach in his synagogue compositions. He questioned strict adherence to synagogue modes, or nusach, and instead preferred a simple, direct and personally expressive style.