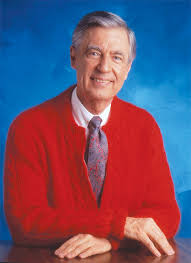 Rogers worked off-camera helping produce the children's show The Children's Hour, and then in 1963, worked on the 15-minute, black-and-white children's show Misterogers in Canada, where he developed many of the characters, props, and sets he used later. In 1968, he returned to Pittsburgh to produce Mr. Rogers' Neighborhood, which ran for almost 900 episodes, until 2001. The program emphasized the child's developing psyche, feelings, sense of moral and ethical reasoning, civility, tolerance, sharing, and self-worth. Difficult topics such as the death of a family pet, sibling rivalry, the addition of a newborn into their families, moving and enrolling in a new school, or divorce were also addressed.

Rogers received over 40 honorary degrees and several awards, including the Presidential Medal of Freedom in 2002, a Lifetime Achievement Emmy in 1997, and was inducted into the Television Hall of Fame in 1999. He has influenced several writers and producers of other children's television shows, and been a source of comfort during tragic events, even decades after his death.