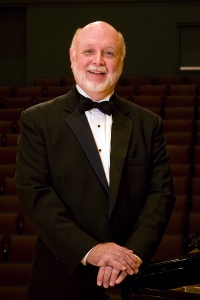 Mr. Allen is retired from a teaching career that spanned over 40 years and included 24 years as director of bands at Stephen F Austin State University, seven years at Abilene Christian University and in two public school districts. At the university level, he taught numerous courses in the music education and wind conducting curricula, including conducting lessons, wind literature, rehearsal techniques, instrumental methods and orchestration in addition to conducting duties with the wind ensemble. His teaching was recognized in 2012 with the Meritorious Achievement Award by the Texas Bandmasters Association. In 2020 he was inducted into the Texas Bandmasters Hall of Fame, sponsored by the Alpha Chapter of Phi Beta Mu Honorary Bandmasters Fraternity.

Allen has conducted All-Region and All-State Bands throughout Texas and the United States, where he is also an active concert clinician and adjudicator. He has often served as guest conductor for bands playing at the Midwest Clinic and the Texas Music Educators Association Convention, and has also conducted in Korea, Taiwan, Hong Kong and Australia.

As an arranger and composer, Allen has published several pieces for band, orchestra and flute choir that have drawn upon his experience in teaching in the public schools. These works have been performed frequently at conventions and festivals across the United States and internationally. He has several commissioned works in progress [2020]. His music is noted in The Heritage Encyclopedia of Band Music (Rehrig), Teaching Music Through Performance in Band (Miles, et al.) and other band music reference books.

Allen played principal clarinet with the Ft. Worth Civic Orchestra for five seasons, was bass clarinetist with the Irving Symphony for three seasons and played clarinet in the Irving Symphony Woodwind Quintet for six years. He held the piccolo position with the Abilene Philharmonic for six years and played both flute and clarinet in several community bands. As a woodwind specialist, he has performed professionally at Opryland, USA and for the Ice Capades and the Ringling Brothers & Barnum and Bailey’s Circus, as well as over forty musicals and operas.