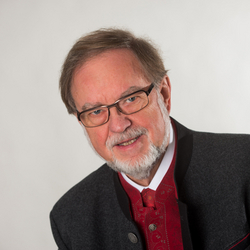 Franz Watz (b. 9 March 1949, Arad, Romania) is a Romanian-born German composer and educator.

Watz studied at the High School for Music in Klausenburg and played clarinet and piano. He then studied music pedagogy , musicology and Tuba at the Academy of Music in Cluj-Napoca.

Watz played with several popular orchestras, including dance orchestras. He founded and led a youth band and also performed with the Aarad Philharmonic Orchestra from 1972-1976.

Since 1977, he has taught at the Boblingen Music School and has worked for the Rundel Verlag as a composer and arranger. After a 20-year conducting career in Ehningen, Watz was appointed musical director of the Musikverein by the council Ehningen in 1997.

He composed under the pseudonym Joe Grain.