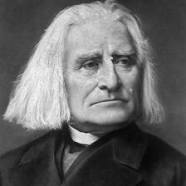 Franz Liszt's father played the piano, violin, cello and guitar. He had been in the service of Prince Nikolaus II Esterházy and knew Haydn, Hummel and Beethoven personally. At age six, Franz began listening attentively to his father's piano playing and showed an interest in both sacred and Romani music. Adam began teaching him the piano at age seven, and Franz began composing in an elementary manner when he was eight. He appeared in concerts at Sopron and Pressburg in October and November 1820 at age 9. After the concerts, a group of wealthy sponsors offered to finance Franz's musical education in Vienna.

There Liszt received piano lessons from Carl Czerny, who in his own youth had been a student of Beethoven and Hummel. He also received lessons in composition from Antonio Salieri, then music director of the Viennese court. Liszt's public debut in Vienna on December 1, 1822, at a concert at the "Landständischer Saal", was a great success. He was greeted in Austrian and Hungarian aristocratic circles and also met Beethoven and Schubert.

Towards the end of 1823 or early 1824, Liszt's first composition to be published, his Variation on a Waltz by Diabelli (now S. 147), appeared as Variation 24 in Part II of Vaterländischer Künstlerverein.

After his father's death in 1827, Liszt moved to Paris. After attending an April 20, 1832, charity concert, for the victims of a Parisian cholera epidemic, by Niccolò Paganini, Liszt became determined to become as great a virtuoso on the piano as Paganini was on the violin. Starting in 1839 and for the next eight years Liszt concertized throughout Europe. This was Liszt's most brilliant period as a concert pianist. Honours were showered on him and he met with adulation wherever he went. He was claimed by some contemporaries to have been the most technically advanced pianist of his age.

In February 1847, Liszt he met the Polish Princess Carolyne zu Sayn-Wittgenstein, who was to become one of the most significant people in the rest of his life. She persuaded him to concentrate on composition, which meant giving up his career as a travelling virtuoso. After a tour of the Balkans, Turkey and Russia that summer, Liszt gave his final concert for pay at Yelisavetgrad in September. By retiring from the concert platform at 35, while still at the height of his powers, Liszt succeeded in keeping the legend of his playing untarnished.

The following year, Liszt took up a long-standing invitation of Grand Duchess Maria Pavlovna of Russia to settle at Weimar, where he had been appointed Kapellmeister Extraordinaire in 1842, remaining there until 1861.

He was a friend, musical promoter and benefactor to many composers of his time, including Frédéric Chopin, Richard Wagner, Hector Berlioz, Camille Saint-Saëns, Edvard Grieg, Ole Bull and Alexander Borodin.

As a composer, Liszt was one of the most prominent representatives of the New German School (Neudeutsche Schule); himself an avant-garde. He left behind an extensive and diverse body of work in which he influenced his forward-looking contemporaries and anticipated many 20th-century ideas and trends. Some of his most notable musical contributions were the invention of the symphonic poem, developing the concept of thematic transformation as part of his experiments in musical form, and making radical departures in harmony.