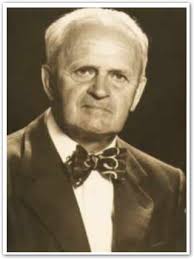 Biebl studied composition at the Musikhochschule in Munich. He served as Choir Director at the Catholic church of St Maria in München-Thalkirchen from 1932 until 1939, and as an assistant professor of choral music at the Mozarteum, an academy of music in Salzburg, Austria, beginning in 1939, where he taught voice and music theory.

Biebl was drafted into the military beginning in 1943 during World War II. He was a prisoner of war from 1944 to 1946, being detained at Fort Custer in Battle Creek, Michigan. After the war, he moved from Austria to Fürstenfeldbruck, Germany, where he served as director of the town chorus.

Most of Biebl's compositions were for choral ensembles. His best-known is his Ave Maria (1964), which sets portions of the Angelus as well as the Ave Maria.