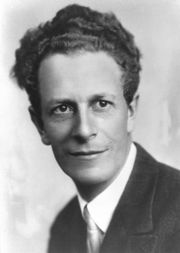 Frank Martin (15 September 1890, Geneva, Swit. – 21 November 1974, Naarden, the Netherlands) was a Swiss composer and educator, who spent much of his life in the Netherlands.

Born the youngest of the ten children of a Calvinist pastor named Charles Martin, Frank Martin started to improvise on the piano prior to his formal schooling. At the age of nine he had already written a few songs without external musical instruction. At 12, he attended a performance of Johann Sebastian Bach's St. Matthew Passion and was deeply affected by it.

Respecting his parents' wishes, he studied mathematics and physics for two years at Geneva University, but at the same time was also studying piano, composition and harmony with his first music teacher Joseph Lauber (1864–1953), a Geneva composer and by that time a leading figure of the city's musical scene. In the 1920s, Martin worked closely with Émile Jaques-Dalcroze from whom he learned much about rhythm and musical theory. Between 1918 and 1926 Martin lived in Zurich, Rome and Paris. Compositions of this time show him searching for an authentic musical voice of his own.

In 1926, Martin established the Chamber Music Society of Geneva which for the next ten years he conducted, as well as contributing on the clavichord and piano. During this period he was also teaching musical theory and improvisation at the Jaques-Dalcroze Institute, and chamber music at the Geneva Conservatory.

Martin's music was often inspired by his Christianity. In this regard, his compositions stemmed from "the individuality rather than universality of his faith ... certainly broader than Calvinism".

Other Martin pieces include a concerto for seven wind instruments, and a series of six one-movement works he called "ballades" for various solo instruments with piano or orchestra.

Martin based his mature style on his personal variant (first used around 1932) of Arnold Schoenberg's twelve-tone technique, but he did not abandon tonality. Lean textures and habitual rhythmic vehemence distinguish his style from Schoenberg's. Some of Martin's most acclaimed music comes from his last decade.

Mr. Martin founded the Technicum Moderne de Musique and was president of the Swiss Association of Musicians.