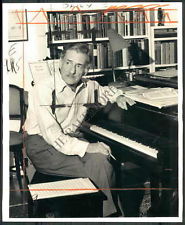 Prior to the composing of this march, Richard Franko Goldman’s output had mostly been in the field of chamber music, having composed for and been identified with The League of Composers and other groups involved with some of the earliest commissions of wind band repertoire. The Foundation March represents his first excursions into the great march tradition represented more by his father, Edwin Franko Goldman (1878-1956). As he explained, “I did not wish to write in this form during my father’s lifetime.” The march is dedicated “to the Officers and Directors of the Daniel and Florence Guggenheim Foundation” in appreciation of their continued generous support of The Guggenheim Memorial Concerts.