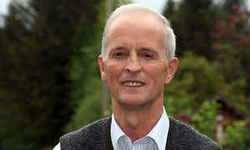 The musical career of Florian Pedarnig began at the clarinet as a twelve-year-old. At the age of 17 he became the conductor of his home town Schlaiten. Pedarnig studied Waldhorn , double bass and theory at the Tyrolean Landeskonservatorium in Innsbruck and played for four years with the military music of Tyrol under the direction of Siegfried Somma . In 1963 he finished his studies and then entered the Innsbruck Symphony Orchestra.

From 1964 Pedarnig was a member of the Stadtmusikkapelle Wilten and their deputy Kapellmeister. Florian Pedarnig continued his studies in Munich until 1965. In 1974, he founded the Tiroler Kirchtagmusig with other musicians in Innsbruck. In 1980, as successor to Prof. Sepp Tanzer , he became Landeskapellmeister of the Tiroler Blasmusikverband.

Florian Pedarnig has also worked as a conductor of the Bundesbahnkapelle Innsbruck, as a freelance member of the ORF-Landesstudio Tirol, as well as as a folk music expert.