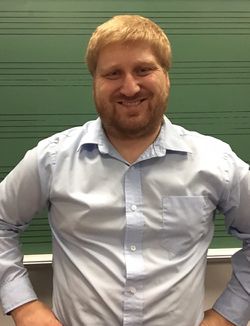 First Suite for Wind Band is a set of five short movements, inspired by Gunnar DeFrumerie’s Pastoral Suite for Flute, Harp, and Strings and by Igor Stravinsky’s Suites for Small Orchestra. Similar to DeFrumerie’s suite (which the movement structure is loosely modeled after), much of this suite sounds deceptively simple upon first listen. However, ingrained in each movement are subtle complexities and a passionate intensity which gradually builds until it erupts in the climax of movement 4.

The first movement is a gentle pastoral prelude featuring a lyrical euphonium solo. There is peace and serenity, but also a feeling of barely-contained passion.

The second movement is a sinuous and shifty sarabande (with an eighth note removed). This is the most challenging movement, as it contains several tricky rhythmic elements.

The third movement is a gavotte which should never feel at ease: it should always be angsty, restless, and on the edge of pushing forward in tempo. There should be very little feeling of resolution (even at the cadences) until the final few measures.

The fourth movement is where the sentiments which had been bubbling under the surface break free with a tense and mournful fughetta.

The fifth movement offers an exciting finale in which the surplus tension is released as an adrenaline rush. It is fiery, passionate, and aggressive.