Finale from "Symphony No. 5" 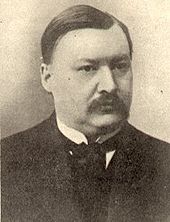 This work bears the designation Opus 55.

Glazunov dedicated his Fifth Symphony to Sergei Taneyev, a Russian composer, pianist, and teacher, and it was first performed at the Second Russian Concert at the Hall of the Nobility in St. Petersburg on 17 November 1896; the premiere was conducted by the composer himself. A Leipzig newspaper called the symphony "very profound" and "sparkling" and reported that the scherzo had to be reprised on opening night to the delight of the audience.

Glazunov’s compositions include eight symphonies, three ballets, numerous chamber works, and concertos for violin, piano, and saxophone. His Symphony No. 5 was completed in 1895 and was composed in a traditional four-movement structure. In the Finale, rhythmic themes infuse the rondo form with a sense of epic heroism, providing an energetic and powerful conclusion to the work.