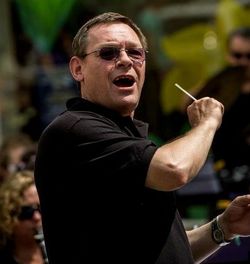 Fergus O’Carroll (b. 1956, Waterford, Ireland) is an Irish hornist, composer and educator.

Born into a musical family, Mr. O'Carroll studied French horn with Victor Malirsh at the Royal Irish Academy of Music under a scholarship from the Irish Youth Orchestra and is currently Section Principal Horn with the National Symphony Orchestra of Ireland. Fergus holds a Masters Degree in Music from CIT Cork School of Music.

As well as being Musical Director of the award winning Dublin Concert Band, Fergus is also Musical Director of Mullingar Choral Society and Director of the Junior and Senior Wind Bands at the Royal Irish Academy of Music where he also teaches French Horn. He has appeared on many occasions as guest conductor with the RTÉ National Symphony and Concert Orchestras and has also conducted the Orchestra of St Cecilia, the Dublin Baroque Players and many other community institutions.

Fergus was Chairperson of the Local Organizing Committee that hosted the much acclaimed World Association for Symphonic Bands and Ensembles (WASBE) World Conference in Ireland in July 2007 and is a publisher of Irish wind band music. As a composer, he has had many of his compositions and arrangements performed and recorded by leading ensembles and he is recognized nationally as a specialist in the field of music notation.

After a long career as a professional horn player with RTÉ, Fergus retired in 2016 as Acting Section Leader French Horn with the National Symphony Orchestra and shortly thereafter he became Head of Faculty, Woodwind Brass and Percussion, at the Royal Irish Academy of Music.