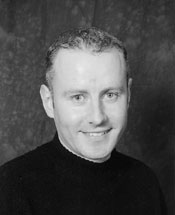 Fergal Carroll (b. 26 December 1969, Tipperary, Ireland) is an Irish composer.

He began playing the trumpet and piano. From 1993 to 1997, he studied music at the Waterford Institute of Technology, majoring in composition. He graduated with a first class honors degree and was awarded the 1997 Good Shepherd Arts Award. In 1998, he undertook an MA in composition at the Royal Northern College of Music in Manchester.

In addition to his compositional work, Fergal Carroll teaches music at the Ursuline Secondary School, Thurles, and is active as a conductor throughout southeastern Ireland. He is also the conductor of the Irish Defense Forces Band in Dublin.