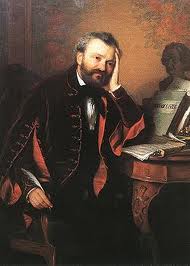 Ferenc Erkel (born 7 November 1810 in Gyula; died 15 June 1893 in Budapest) was a Hungarian composer. He played and taught the piano in Kolozsvár, then settled in the capital circa 1835, conducting opera, appearing as a piano soloist and composing instrumental pieces with Hungarian themes (e.g. the Duo Brillant for violin and piano, 1837). He decided not to compete with Liszt as a pianist but turned to writing for the stage: his well-received Bátori Mária (1840) led quickly to Hunyadi László (1844), the most successful of his operas in Hungary; it combines Italian and Viennese Classical influences with indigenous ones, notably the ‘Hungarian scale’, rhythms, heroic expression and tripartite form of the verbunkos, and the dramatic climaxes of the csárdás. He was conductor at the National Theatre, Pest (1838-74; succeeded by Hans Richter), and for the Philharmonic Concerts which he founded, composing mainly shorter works from this time onwards, including the well-known népszínmű; (popular plays with interpolated songs) Két pisztoly and A rab and the Hungarian national anthem (1844). His strikingly successful Bánk bán (1861), written with his most talented sons Gyula (1842-1909) and Sándor (1846-1900), represents the culmination of his native operatic style. Neither his later comic works nor his experimental, nationalistic music dramas were as distinctive, though the Wagnerian Brankovics György (1868-72) was considered his masterpiece during his lifetime. He devoted his last years to choral music and the directorship of the Budapest Academy of Music.