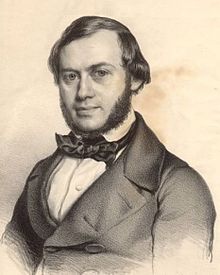 David was raised Jewish but later converted to Christianity. David was a pupil of Louis Spohr and Moritz Hauptmann from 1823 to 1824 and in 1826 became a violinist at Königstädtischen Theater in Berlin. In 1829 he was the first violinist of Baron Carl Gotthard von Liphardt's (father of Karl Eduard von Liphart) string quartet in Dorpat and he undertook concert tours in Riga, Saint Petersburg and Moscow. In 1835 he became concert master (Konzertmeister) at the Gewandhaus in Leipzig working with Mendelssohn. In 1843 David became a professor of violin (Violinlehrer) at the Leipziger Konservatorium.

David worked closely with Mendelssohn, providing technical advice during the preparation of the latter's Violin Concerto in E minor. He was the soloist in the premiere of the work in 1845.

David also worked as editor of violin works including those of Francesco Maria Veracini, Pietro Locatelli and Johann Gottlieb Goldberg. He was editor of the complete Beethoven piano trios for C.F. Peters. He was also editor of the set of J.S. Bach's Sonatas and Partitas for solo violin in 1843.

David's own compositions number about 40. They include two symphonies, five violin concertos, an opera (Hans Wacht, 1852), a string sextet for three violins, viola and two cellos, and a number of Lieder. David also composed a Concertino for Trombone and Orchestra, published by the Friedrich Hofmeister Musikverlag, and a bassoon concertino.