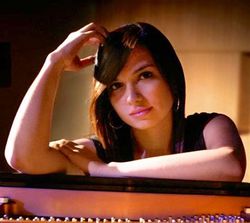 Edna Alejandra Longoria (b. 1988, McAllen, Tx.) is an American composer.

Raised in Reynosa, Tamaulipas, México, Edna obtained a master's degree in music composition at the Bob Cole Conservatory of Music at California State University in Long Beach, and a bachelor's degree in music composition from the University of Texas at San Antonio. She has had the privilege of studying composition with Dr. Alan Shockley, Dr. Carolyn Bremer, Dr. Adriana Verdie, Perry LaMarca, James Syler, Dr. James Balentine, and Dr. David Heuser.

Edna enjoys incorporating her Latin roots into her music and mixing it with contemporary techniques. Her music participated in a workshop with the highly acclaimed Kronos Quartet, and has been premiered by various ensembles and musicians such as Verdant Vibes ensemble, North/South Consonance ensemble, Chatter ensemble, and soprano Noel Archambeault, among others.

Edna’s music has been premiered in the US, Mexico, and Europe. Her music was recently performed at the SCI National Conference in New México, Music by Women Festival in Mississippi, and the SCI Region VI Conference in Texas. Miss Longoria’s piece Danzas cautivas won the call for scores for the LunArt Festival, which was featured on June 2019 in Madison, Wisconsin. Ms. Longoria has recently won the 2019 San Antonio Performing Arts Grant Award which will fund her Chicana Art Song Project. On May of 2019, Edna Longoria was among the selected composers who participated in the Alba Composition Program in Italy.