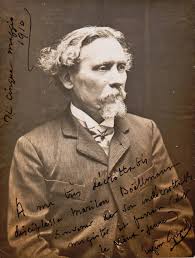 Eugène Gigout (23 March 1844, Nancy, France – 9 December 1925, Paris) was a French organist and a composer, mostly of music for his own instrument.

A pupil of Camille Saint-Saëns, Gigour served as the organist of the French capital's Saint-Augustin Church for 62 years. He became widely known as a teacher, and his output as a composer was considerable. Renowned as an expert improviser, he also founded his own music school. His nephew by marriage was Léon Boëllmann, another distinguished French composer and organist.

The 10 pièces pour orgue (composed 1890) include the Toccata in B minor, Gigout's best-known creation, which turns up as a frequent encore at organ recitals. Also fairly often played, and to be found in the same collection, is a scherzo in E major. Other notable pieces by Gigout are Grand chœur dialogué, which dates from 1881, and Marche religieuse.