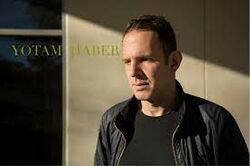 Born in Holland and a citizen of Israel, Yotam Haber received his doctoral degree from Cornell University. Espresso was commissioned by Cornell University. The Cornell University Wind Ensemble, conducted by David Conn at Ithaca College in 2004, gave its premiere. It was awarded the second biannual ASCAP/CBDNA Frederick Fennell Prize in the fall of 2004. Haber has provided the following note.

Espresso was the first work I wrote in New York City. It was written in a tiny studio just big enough for an upright piano, a chair, a desk, and an espresso machine -- the bare necessities for a composer (Beethoven drank 17 cups a day). This dark, short, concentrated shot of a piece is concerned with the development of a flitting, whirring motive first played by a pair of clarinets and then expanding out in both directions, always in instrumental pairs. A climax is reached, and after a brass interruption, a set of colorful, mercurial variations follow. The work ends with a calm coda of weightless whispers … an aftertaste, faintly recalling flavors just experienced.