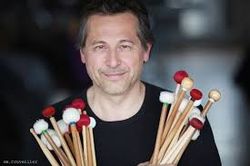 Escales Concerto pour Timbales et Orchestre d’Harmonie (2012/2019) is a twenty-five-minute work in three movements, with the first two movements performed without a break. Escales is the synthesis of a musical and rich human experience, encounter and influence, highlighting the instrument largely unknown to the general public as a solo instrument. The concerto uses modal themes typical of the composer. The timpani are used as both a rhythmic and melodic instrument, which requires the performer to have great virtuosity, with regard, in particular, to the tuning changes executed with the performers’ feet on the pedals.

The first movement is based on the notes E and D-sharp, and reflects a heavy and disturbing mood. The second movement is a variation on a melodic theme played by the timpani,in the form of a passacaglia. This resolves the duality of the notes E and D-sharp, which are the basis of the first movement. The third movement is a rhythmic dance, which is reminiscent of soundtracks or pop music. A cadenza for the soloist uses elements of the second movement, which interrupts the dance. This is followed by a quiet and mysterious interlude and leads to a tribal ending

The title, Escales, translates from the Catalan as "steps", from the French as "stops," and from the Spanish as "scales."