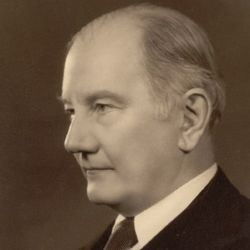 Dohnányi Ernő (27 July 1877, Pressburg, Slovakia – 9 February 1960, New York City) was a Hungarian composer, pianist and conductor. He used a German form of his name, Ernst von Dohnányi, on most of his published compositions.

Dohnányi first studied music with his father, an amateur cellist and then at the Music Academy in Budapest and later with Eugene d’Albert in Paris. He was active as a teacher and pianist in Hungary, Argentina, and the United States. He taught at the Hochschule in Berlin (1905-1915), and then went back to Budapest, where he organized more than 100 concerts annually. In 1919, he was named director of the Budapest Academy, but was quickly replaced for political reasons. He then became director of the Budapest Philharmonic Orchestra, where he championed the music of Bartok, Kodaly, and other Hungarians. He was director of the Budapest Academy once again (1934-1941).

The growing influence of National Socialism led to his resignation in 1941. In 1944 he left Hungary for Austria, a decision that brought later criticism. For some he seemed associated with the Horthy régime at home, while for others he appeared as a dissident against prevailing Fascism. From 1945 his appearances in Hungary were banned, and a prohibition on his compositions continued there until the 1970s. In 1948 he left Europe for Argentina, where he headed the music department at the University of Tucumán and the following year he took the position of professor of piano and composition at the Florida State University, while resuming something of his former career as a pianist.

Dohnányi's compositional style was personal, but very conservative. His music largely subscribes to the Neoromantic idiom. Although he used elements of Hungarian folk music, he is not considered a nationalist composer like Béla Bartók or Zoltán Kodály. Some characterize his style as traditional mainstream Euro-Germanic in the Brahmsian manner (structurally rather than the way the music actually sounds) rather than specifically Hungarian, while others hear very little of Brahms in his music, the best of which may be his Serenade in C major for string trio, Op. 10 (1902) and Variations on a Nursery Song for piano and orchestra, Op. 25 (1914).