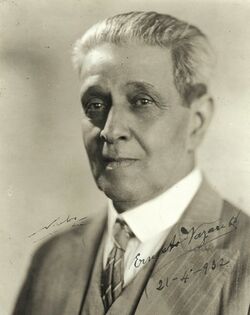 Nazareth's mother, Carolina da Cunha gave him his first piano lessons. At the age of ten, after his mother's death, he continued his piano studies with Eduardo Madeira and Charles Lucien Lambert. Strongly influenced by Chopin, Nazareth published his first composition Você Bem Sabe (You know it well) in 1877, at age 14. At that time, he had begun his professional career playing in cafes, balls, society parties and in the waiting rooms of movie theaters. In 1893, Casa Vieira Machado published his famous tango Brejeiro.

In 1879, he wrote his first tango, Cruz perigo. In 1880, at the age of 17, he made his first public appearance at the Mozart Club. The following year, he composed the tango Não caio n'outra, his first great success, with several reprints. In 1885, he performed in concerts in different clubs of the court. In 1893, Casa Vieira Machado launched a new catalogue of his compositions, including the tango Brejeiro, which achieved national and even international success, in that the Republican Guard band of Paris began to include it in their repertoire, coming even to record it.

His first concert as a pianist took place in 1898. The following year he prepared the first edition of the tango Turuna. In 1905, he had his first work, Brejeiro, recorded by singer Mario Pinheiro with the title O sertanejo enamorado with lyrics by Catulo da Paixão Cearense. Meanwhile, the "Casa Édison" marching band recorded his tango Brushed, which became quite successful. In 1907 Ernesto Nazareth was appointed third book-keeper of the National Treasury, a position that he did not occupy for not mastering the English language. In 1908, he began working as a pianist at the Mozart Club.

The following year, he participated in a concert held at the National Institute of Music, playing the gavotte Corbeille de fleurs and the tango Batuque. He began to teach private piano lessons and was hired as a pianist for "Casa Gomes" in 1921 and the Odeon Cinema from 1920 until 1924. In São Paulo and Campinas he performed several shows in the Municipal Theater and at the Conservatory. He was given then a grand piano as a gift from his admirers. He was one of the first artists to play for the Society Radio of Rio de Janeiro. In 1932 he presented for the first time, a recital in which he performed only his compositions.