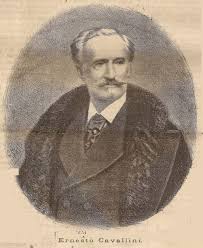 Cavallini entered the Milan Conservatory at age ten to study under Carulli. He performed at the Conservatoire Concerts in 1830 with his brother, violinist Eugenio Cavallini. He became the principal clarinetist of La Scala under Giacomo Panizza. He also taught at the Milan Conservatory and spent 15 years performing in St Petersburg from 1852 to 1867.

Cavallini was described as the "Paganini of the clarinet". His playing inspired Verdi to compose a clarinet solo and cadenza in his 1862 La Forza del Destino, and led Panizza to include a set of variations for clarinet in his The Challenge of Barletta.

As a composer, Cavallini is best known for Adagio and Tarantella, Adagio Sentimental, his fantasies, and his 30 caprices for Clarinet. Cavallini also composed several works for E♭ clarinet. He cited Rossini as an influence in his compositions, and composed Una Lagrima sulla Tomba dell'Immortale Rossini in his honour. His compositions were often performed by fellow clarinetist Ferdinando Busoni.