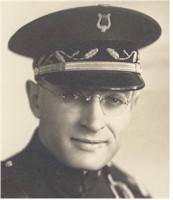 Caneva's father, Luciano O. Caneva, led the town band of Asiago, Italy, and at the age of nine the young Ernest joined the band as a snare drummer. At 12, he began the study of clarinet, and by the age of 15 he was studying piano, solfeggio, and cornet. At this age, his talent as a composer manifested itself; a piece written for the Asiago band, Tarantella Capri, was later published by Leonard. Because full band arrangements published with individual parts were not available in Italy at the time, he arranged much music for the Asiago band.

Caneva’s later musical training included study at the Collegio Baggio and the Vicenza Conservatory in Italy, Northwestern University, De Paul College, and VanderCook College, where he was awarded Bachelor of Music and Master of Education degrees.

The Caneva family emigrated from Italy in 1924 and settled in Lockport, Illinois. That same year, Ernest joined a navy reserve band, performing with it for nine months. Later, he operated music studios in the cities of Joliet, Lockport, Aurora, and Lemont, all in Illinois. He also played in several dance bands, including the Golden Gate Ramblers Orchestra, with which he toured for three years. He and his brother Carl were featured regularly on several local radio programs.

In 1932, Caneva was appointed director of bands at Lockport High School, a position he held until his retirement in 1972. During his tenure, he also organized and taught bands in four of Lockport’s six elementary schools.

Caneva was an active adjudicator, clinician, and guest conductor throughout the United States with high school, college, and military bands. A charter member of both the American School Band Directors Association and the National Band Association, Caneva held memberships in the Music Educator’s National Conference and the Illinois Music Educators Association. He was elected to the American Bandmasters Association in 1958. Among his many other honors were a dedication in First Chair of America (1957), The VanderCook College Alumni Distinguished Service Award (1976), and election to the Bandmaster’s Hall of Fame at Northwestern University in 1984.