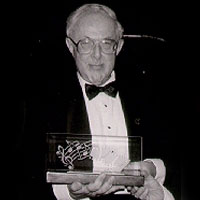 Gold moved to the U.S. in 1938, after the Anschluss of Austria (his paternal grandfather was Jewish). Gold wrote nearly 100 film and television scores between 1945 and 1992. Among his credits are Too Much, Too Soon, Exodus, It's a Mad Mad Mad Mad World, On the Beach, A Child is Waiting, Fun with Dick and Jane, and Good Luck, Miss Wyckoff.

Gold's contributions were recognized with four Academy Award nominations and three Golden Globe nominations. He won a Golden Globe in 1960 for Best Motion Picture Score for 1959's On the Beach, and won an Academy Award a year later for Best Music: Scoring of a Dramatic or Comedy Picture, for Exodus. The Hollywood Walk of Fame has also recognized him with a star on famed Hollywood Boulevard.

Gold composed the music for the 1968 Broadway musical I'm Solomon. His classical works also included a piano concerto, a string quartet, and a piano sonata.