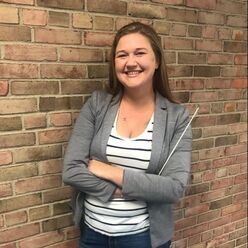 Erin Lilliefors (b. Muskegon, Mich.) is an American composer and educator.

Ms. Lilliefors graduated from Eastern Michigan University in 2009 and began her first job as an educator at Hooks, Texas. She then took a job as head middle school band director for Memorial Middle School in Winnsboro, Texas, from 2010 to 2014.

Lilliefors relocated back to Michigan in fall of 2014 where she began her graduate work in composition at her alma mater, Eastern Michigan. She began working in Morenci, Michigan, as k-12 then 5-12 music educator from 2015 to 2017. She is presently employed as a music educator in Ann Arbor Public Schools where she teaches 5-8 band and composes in her “spare time”.

Erin Lilliefors has had the privilege to be mentored by Matt Tropman, Ben Scarborough, Carolyn Bybee, Geoffrey Stanton, and many others. She appreciates all of the help and support these colleagues and professors have given her.