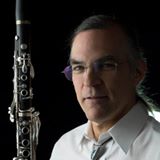 Eric Paul Mandat (b. 1957) is a composer, educator and performer of contemporary clarinet music.

Mandat began his clarinet studies under the tutelage of Richard Joiner of the Denver Symphony. He later studied with Lee Gibson, Keith Wilson, D. Stanley Hasty, and Charles Neidich. Mandat received his undergraduate education at the University of North Texas, and received graduate degrees from the Yale School of Music, and the Eastman School of Music.

Mandat currently serves as Professor of Music and Distinguished Scholar at Southern Illinois University Carbondale, and he has also taught as Visiting Professor of Music at Jacobs School of Music at Indiana University. Students from his studio at Southern Illinois University Carbondale have included Sean Osborn of the Metropolitan Opera, concert recitalist Michael Norsworthy, international performer and teacher Boja Kragulj, and many other orchestral clarinetists and clarinet professors.

In his performances and compositions, Mandat uses extended techniques such as multiphonics and microtones. Although most of his corpus consists of works for solo clarinet, more recent compositions are for clarinet ensembles.

He frequently performs in the Chicago Symphony Orchestra's MusicNOW Series (including as principal clarinet for Pierre Boulez's 80th Birthday Concert under Boulez's baton and a performance of Osvaldo Golijov's Ayre with Dawn Upshaw). He also regularly performs with the Tone Road Ramblers, an independent ensemble specializing in experimental and improvised music. His reviews of new clarinet recordings frequently appear in The Clarinet.