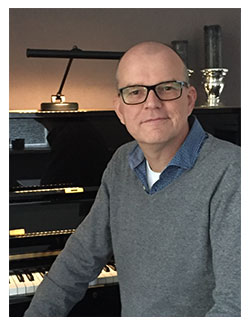 Ennio Salvere is the pseudonym for composer and conductor Eric Swiggers (b. 12 October 1968, Deurne, Netherlands).

After grammar school Swiggers continued his musical education at the Conservatory in Tilburg where he graduated in three master's degrees, keyboards, wind band conducting, and composition with Kees Schoonenbeek. He also studied various instrumental subsidiary subjects as saxophone with Jean Pennings and Hans de Jong.

During this period Swiggers made some concert tours, e.g., to Greece and Hungary where he performed on the Conservatory of Szged. He has numerous compositions and arrangements in widely different genres to his name. He composed for wind band, choir, string quartet, carillon, saxophone ensemble, symphonic orchestra and other instrumental combinations. Under the pseudonym "Ennio Salvere" he wrote some very popular pieces for youth orchestra.

In March 2001 he won the first prize awarded by the Hilvarenbeek town council in the composers' competition with the work Suite for Saxophone quartet, Piano and Percussion. In 2005 he was invited to Shanghai where he conducted his composition Decennium. As a conductor he worked with several well-known wind bands and won many prices and awards. From 1994 till 2000 he worked as a teacher at a school of music where he also conducted a symphonic orchestra. Currently Swiggers' main occupations are composing and arranging.