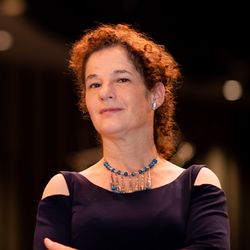 Eliane Aberdam (b. 1964, Nancy, France) is a French composer and educator living in the United States.

As a child, Eliane Aberdam studied piano and theory at the Conservatoire National de Region in Grenoble, France from 1972 to 1981. She completed her undergraduate studies in composition at the Rubin Academy of Music and Dance in Jerusalem in 1987, where she studied with Mark Kopytman. In 1989, she entered the graduate program at the University of Pennsylvania where she studied with George Crumb, and obtained her master's degree in 1992. She then completed her Ph.D. in xomposition at U.C. Berkeley in 1998.

Dr. Aberdam's works are performed in Israel, Europe, and the United States. She has written three operas, numerous chamber and orchestral works, art songs, choir pieces, solo pieces for various instruments, works for electronic music, and one contrabass concerto. In 1995, she was selected by IRCAM for the Annual Course in electronic music, and for the commission of PaRDeS, an electro-acoustic work for chamber ensemble and electronics. In 2000, the Ensemble Inter-Contemporain (Paris) premiered the chamber orchestra piece Quoi? Ce point after Primo Levi’s The Periodic Table. She also attended music festivals such as The Bartok Seminar in Hungary, June in Buffalo, the Académie d’Été in Paris, and Voix Nouvelles in Royaumont (France).