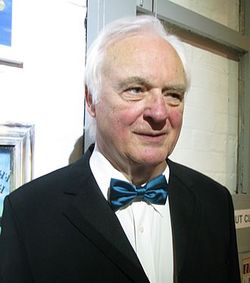 Elgar Howarth (b. 4 November 1935, Cannock, England) is an English conductor, composer and trumpeter.

When Howarth was 15 months old, his family moved to Eccles, a small town near Manchester. His father was a Salvation Army Bandmaster. At the age of 11, Elgar joined the Barton Hall Works Brass Band of which his father was the director. When he was 14, he became principal cornet of the band. At the age of 16, he won the Alexander Owen Memorial Fund Scholarship. He studied composition at Manchester University and the Royal Manchester College of Music.

From 1956-1958 Howarth served in the British military, playing cornet with the Royal Air Force Central Band. He then joined the Royal Opera House Orchestra on the very day that he left the Air Force Band. In 1963, Howarth joined the Royal Philharmonic Orchestra. Two years later, he was named principal trumpet there. He left the orchestra in 1970 because his career was pointed more towards chamber music groups both as a trumpeter and a conductor. Among the groups he performed with then were the London Sinfonietta, the Nash Ensemble, and the Philip Jones Brass Ensemble. In 1972, he became director of the Grimethorpe Colliery Band. From 2001-2005, he served as Artistic Director of the National Youth Brass Band of Great Britain. Recently, he became director of Brass Ensembles at the Royal Academy of Music.

As a composer, Howarth has written under his own name, and under the pseudonym W. Hogarth Lear for lighter works. He writes mainly for brass instruments. Swedish trumpeter Håkan Hardenberger has premiered several of his works on cornet, including his Cornet Concerto, Canto, and Capriccio. He has written arrangements such as The Carnival of Venice Variations for brass ensemble and Modest Mussorgsky's Pictures At An Exhibition arranged for brass band.