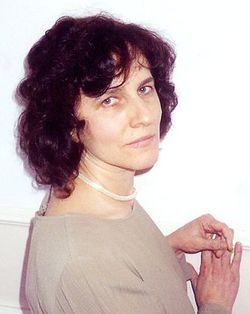 Firsova studied music in Moscow with Alexander Pirumov, Yuri Kholopov, Edison Denisov and Philip Herschkowitz. In 1979 she was blacklisted as one of the "Khrennikov's Seven" at the Sixth Congress of the Union of Soviet Composers for unapproved participation in some festivals of Soviet music in the West.

Firsova has composed more than a hundred compositions in many different genres, including chamber opera The Nightingale and the Rose after Oscar Wilde and Christina Rossetti (premiered at the 1994 Almeida Opera Festival, London), an orchestra work Augury, (premiered at the 1992 BBC Proms) that includes a choral setting of William Blake's famous lines "To see the world in a grain of sand..." and Requiem to Anna Akhmatova's poem for soprano, chorus and orchestra (premiered at the Konzerthaus Berlin in September 2003).

Her favorite genre is a chamber cantata for solo voice and ensemble (or orchestra). Some of them are written to the poems by Alexander Pushkin, Marina Tsvetaeva, Boris Pasternak and Oleg Prokofiev. However, most of them are setting the poems by her favorite poet Osip Mandelstam that include Earthly Life, Tristia, Petrarch's Sonnets, and others.