Elegy for a Joyful Heart 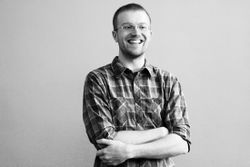 Commissioned by Bruce and JoAnne Vieweg in 2013, this piece honors the memory of their friend (and Bruce's colleague) Pamela M. Jolicoeur, former president of Concordia College, who died unexpectedly in 2010. Much beloved by faculty, students, and staff, her passing was deeply felt throughout the Concordia community.

The piece is largely based on the Bach chorale, Wie schön leuchtet der Morgenstern, which supplies the tune to one of Jolicoeur's favorite hymns. At times, as in the first section, this basis is often acutely subtle; in others, as in the second, the chorale is essentially stated verbatim.

An additional quotation rises from my closest connection to Jolicoeur. Although I was a student for two years of her presidency, I never knew her personally. However, Dr. Jolicoeur was instrumental in establishing a sister-school relationship between Concordia and United International College in Zhuhai, China. When the Concordia Band toured China in May of 2012, UIC hosted our first performance. Among our repertoire was an arrangement of the Love Song of Kang Ding, which became one of our favorites to play. I have included this melody in the musical fabric of the piece.

Regarding form, the piece comprises three sections, embodying distinct phases of the grieving process. The first evokes the raw emotions in the immediate wake of a tragedy, where survivors have little recourse but to mourn. The second accompanies a fond remembrance, still however tinged with heartache at the proximity of the loss. Finally, the third celebrates the legacy of the fallen that continues to live on, transitioning triumphantly into major after a bitter struggle. Wistful horn and piano solos at the very end overlay a texture that connotes a hard-earned feeling of contentment and peace.

Elegy for a Joyful Heart was premiered by the Concordia College Band on their 2014 domestic tour, Dr. Peter Haberman conducting