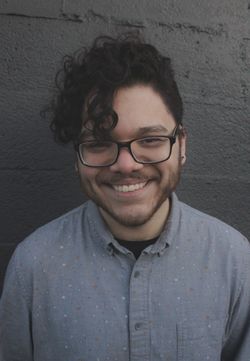 El Chupacabra was inspired by the story of a creature said to attack and drink the blood of animals. The word chupacabra translates literally to “goat sucker” in reference to the initial encounters with the beast, where livestock was reported to have been found with puncture wounds in the chest area and drained of their blood.

I commissioned two other artists to provide additional materials for the project in an effort to provide some context for an audience that may not have much, if any, knowledge of these occurrences. The first piece is an acrylic painting on canvas, painted by Shay O’Day, and the second is a piece of mixed media literature by Katee Wilson. I gave both artists the same goal, which was to create an environment for my music to take place in. Along with that I explained the concept behind the piece and gave them a recording of the finished piece of music. I was motivated to commission both of these works by desire to bridge gaps between various art forms. The outcome, displayed in this score, exceeded all of my expectations.

One of the first reported attacks by the chupacabra happened in the Puerto Rican town of Canóvanas, which is within 10 miles of El Yunque National Rain Forest. Now imagine that you are in this area of Puerto Rico. El Yunque receives about 120 inches of rainfall annually with an average year-round temperature of 80 degrees Fahrenheit -- it’s very humid. There is an abundance of wildlife: various species of birds, bats, frogs, and insects. One bug in particular, the cucubano, is a lot like a firefly, but with two luminescent spots instead of one. Now imagine, you’re in this rain forest and it’s incredibly dark and it’s raining. You hear all kinds of movement around you from the wild life. You keep seeing pairs of eyes moving around – or are they bugs?

Are you the hunter or the hunted?