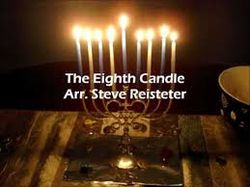 Mature bands will enjoy programming this fine Hanukkah selection in their holiday concerts. It is a true symphonic treatment of original themes which sound so authentic that the work conveys the sense of reverence and solemnity associated with the season.

I have the good fortune to perform in many groups here in the Lehigh Valley. One of them is the Allentown Band, which is America’s oldest civilian concert band (est. 1828). We do a lot of concerts throughout the year and we always do a holiday concert at Allentown’s Symphony Hall in December.

Back in 1997 our conductor, Ronny Demkee (to whom The Eighth Candle is dedicated) came to me asking if I could compose a piece for Hanukkah since the band had hardly any music for that beautiful holiday. Unfortunately he asked me to do this in November and the band needed it in a hurry. Luckily, things went well and I finished composing the piece in about three days. The orchestration and printing out the parts took a little longer.

I just wanted to write a piece with two contrasting sections. Being Roman Catholic I didn’t grow up singing Hanukkah songs or celebrating the holiday. I’m familiar with Jewish music from playing clarinet and tarogato with Klezmer groups (so maybe that explains some of the hyperactive passages for the woodwinds near the end of the piece). I tried to do with the piece what Copland did in some of his works. Don’t get me wrong: I’m nowhere near Copland’s league as a composer. However, in many of his compositions he composed his own folk songs and hymn tunes. He did this in pieces like Our Town, The Red Pony, and Appalachian Spring (except where he quoted Simple Gifts). I tried to make my material in The Eighth Candle sound as if it could be Hebraic, but they’re all composed by me (it’s not an arrangement of pre-existing material). I’ve had Jewish band directors contact me and ask where I found all of these Hanukkah tunes that they weren’t familiar with. The simple answer is that they’re my own from my imagination.

The Eighth Candle remembers the story of Hanukkah, the Festival of Lights. It begins with an extended hymn-like section followed by an exciting dance of celebration. The feast commemorates the victory of the Maccabees over the Syrian-Greek tyrant Antiochus over 2,180 years ago. Legend has it that after the battles were won there was only enough oil for the ceremonial lights to last for one day, yet by some miracle the oil lasted for eight days. Hanukkah is celebrated by the family in the home rather than in the synagogue. In modern times candles are lit, one for each day of the holiday, prayers are recited, then the feast and merrymaking begin.