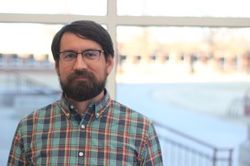 Drew Morris (b. 4 March 1984, Springdale, Ark.) is an American composer and educator.

Mr. Morris has been writing music on and off since high school. He was a member of Pat Ellison’s Springdale High School Band. Morris has written music for concert band, percussion ensemble, marching band, British brass band, orchestra, indoor drumline, various chamber groups, jazz band, marimba solo, piano solo, and the Drew Morris ensemble. Morris’s piece Yellow was selected as a finalist in the Third International Frank Ticheli International Composition Contest. Alpha Bravo Niner was published by Row-Loff Productions and has been played around the world.

While working as a band director with the Berryville Band in Berryville, Arkansas, Mr. Morris's compositions were performed by nearly every ensemble.

In 2017 he left his job in Berryville to focus on writing music full time. Since that decision, he has been commissioned for multiple band, percussion, and electronic compositions, and completed several other compositions that had their premiere performances in 2018.