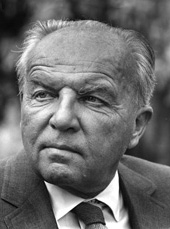 This work's title translates from the German as "Three Funny [or Merry] Marches." It bears the designation Opus 44.

Originally, Krenek had entitled this piece 3 Märches für Blasmusik. His publisher, Universal Editions, was leery of this title, which directly referred to its military band instrumentation. They believed that this title might have stifled sales and distribution of the work, seeing as how original works for military band were uncommon at the time. Krenek's publisher suggested three alternative titles for the work, each indicative of the character of the piece:

Krenek ultimately agreed to change the name of the work in favor of a more descriptive title.

These three short marches are playful in nature, jovial in spirit, and boisterous in character. The bright, almost sarcastic attitude of each march can be heard in the lilting melodies of the woodwinds, grace note embellishments, syncopations and jeering dissonances. It is almost as if Krenek used the instrumentation of the military band to satirize the military march tradition. While that may not have been his intent in composing the work, one can certainly hear the "parodied" style Krenek has adopted in these three brief marches for military band.

Krenek composed his Three Merry Marches, Op. 44 for the 1926 Donaueschingen Contemporary Music Festival. This work was premiered by the Infantry-Regiment No. 15 Band, conducted by his friend Hermann Scherchen. It was included in a program featuring works by such other contemporary composers as Paul Hindemith, Ernst Pepping, and Ernst Toch.

Three Merry Marches reflects several influences: the fun-loving spirit of Krenek’s first wife as well as the practical and entertaining qualities of the music heard during his 1925 visit to Paris. While these pieces adhere to the stylistic characteristics expected in concert marches, they challenge the performer and listener through quirky melodies and challenging harmonic progressions. In some ways, it appears that Krenek offers a satiric view of the military march tradition.