Down by the Riverside (flex) 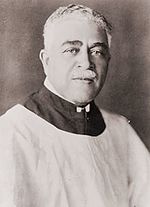 The work is part of the suite Three Spirituals, arranged by Burleigh and adapted by Danyew.

Down by the Riverside (also known as Ain't Gonna Study War No More and Gonna lay down my burden) is a Negro spiritual. Its roots date back to before the American Civil War, though it was first published in 1918 in Plantation Melodies: A Collection of Modern, Popular and Old-time Negro-Songs of the Southland, Chicago, the Rodeheaver Company.

The song was first recorded by the Fisk University jubilee quartet in 1920 (published by Columbia in 1922), and there are at least 14 black gospel recordings before World War II.

Because of its pacifistic imagery, Down by the Riverside has also been used as an anti-war protest song, especially during the Vietnam War. The song is also included in collections of socialist and labor songs.

Harry Thacker Burleigh (1866-1949) was a vocalist and composer who among many other things, created stirring arrangements of African-American spirituals. Three of the spirituals he arranged are included in this collection.

I recommend playing each line in the register notated in the conductor score. (You’ll notice that the parts for players have certain lines displaced by 1 or 2 octaves to fit within that part’s clef). In other words, bass-clef lines should be played by bass-clef instruments. I understand there may be cases where you need to play a line up or down an octave, and that’s fine. Obviously, if you have only cellos or only clarinets and trumpets, you will need to deviate from the recommendations provided. The instrumentation lists will be particularly useful if you have a group of instruments spanning a wide range (bass to treble).

I included a sample written solo that can be played in place of an improvised solo. I find the F major pentatonic scale (F, G, A, C, D) works well in this setting.