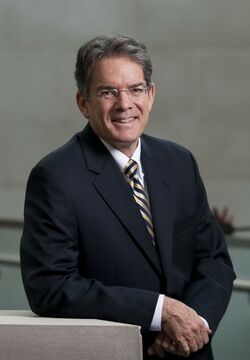 Prof. Lowry earned his bachelor of music degree in theory and composition in 1974 from the University of Arizona, and two master of music degrees from the University of Southern California in trombone performance (1976) and orchestral conducting (1978). Before coming to the Eastman School in 2007, Dean Lowry was dean and the Thomas James Kelly Professor of Music at the University of Cincinnati College-Conservatory of Music. Previously, Dean Lowry was associate dean of the USC Thornton School of Music, where he served in various teaching and academic leadership positions beginning in 1983.

Dean Lowry became the sixth head of the Eastman School in 2007. He was named the first Joan and Martin Messinger Dean in 2011 and was reappointed in May 2013. He founded the Center for Music Innovation and Engagement, under Eastman’s Institute for Music Leadership, as an incubator for new forms of music presentation. The Paul R. Judy Center for Applied Research, founded this year and focused on researching and creating models for alternative ensembles, reflects Dean Lowry’s incisive appraisal of the rapidly changing landscape of the music world.. Dean Lowry appeared throughout the United States and Asia as a guest conductor and clinician for orchestras and wind ensembles. His Geo, commissioned and premiered by Christopher Seaman and the Rochester Philharmonic Orchestra, opened Kodak Hall at Eastman Theatre in October 2009. February 2013 saw the premieres of Lowry’s Freedom Zephyr, his ode to the Underground Railroad, by the Rochester Philharmonic Orchestra, and of his Wind Religion by the Eastman Wind Ensemble.