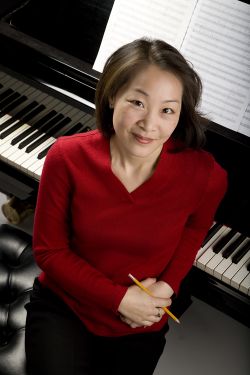 Dorothy Chang (b. 1970, Winfield, Ill.) is an American composer and educator living in Canada.

Dr. Chang's parents' families had fled to Taiwan from China during the Chinese Civil War, before immigrating to the United States. She graduated from the University of Michigan (BM, MM) and Indiana University (DM) with degrees in composition. In 2003, Chang joined the music faculty at the University of British Columbia.

Chang's catalog includes over 70 works for solo, chamber and large ensembles as well as collaborations involving theatre, dance and video. Her interest in cross-cultural and interdisciplinary collaboration has led to projects including a radio play adaptation of Gertrude Stein’s White Wines for four vocalists and speaking percussionist, several mixed chamber ensemble works for Chinese and Western instruments, and most recently, a collaboration with choreographer Yukichi Hattori and four other composers in the large-scale True North Symphonic Ballet premiered in 2017 by the Calgary Philharmonic Orchestra.

In 2007, Chang was the composer-in-residence of the Albany Symphony Orchestra.