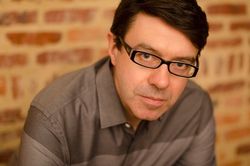 Donnacha Dennehy (b. 17 August 1970, Dublin, Ireland) is an Irish composer residing in the United States

Dennehy studied at the University of Illinois.

Donnacha Dennehy’s music has been featured in festivals and venues around the world, such as the Edinburgh International Festival, Carnegie Hall New York, The Barbican London, and the Schleswig-Holstein Festival.

Dennehy has received commissions from, among others, Alarm Will Sound, Bang on a Can, Contact (Toronto), Dawn Upshaw, Doric String Quartet (London), Fidelio Trio, Joanna MacGregor, Kronos Quartet, and Wide Open Opera (Dublin). Collaborations include pieces with the writers Colm Tóibín (The Dark Places), Paul Muldoon (in progress) and Enda Walsh (including the two operas, The Last Hotel and The Second Violinist).

In recent years, Dennehy has concentrated especially on large-scale musico-dramatic works. His first opera The Last Hotel (2015), with a libretto by Enda Walsh, was met with critical acclaim in the UK when it premiered at the Edinburgh International Festival in August 2015. His second opera with Enda Walsh, The Second Violinist (2017) won the 2017 Fedora Prize for Opera (Salzburg/Paris) and was premiered in July 2017 at the Galway International Arts Festival.