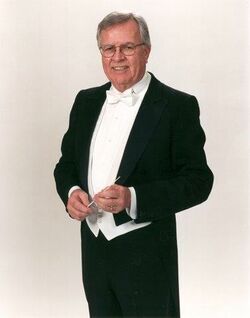 Donald Hunsberger (b. 2 August 1932, Souderton, Pennsylvania) was the conductor of the Eastman Wind Ensemble from 1965 until 2001. He also held the position of professor of conducting at the Eastman School of Music. Generally regarded as a key contributor to the rise of the modern wind ensemble in the twentieth century, Hunsberger's notable contributions include conducting, recording, and arranging music for winds.

During his tenure with the Eastman Wind Ensemble, Hunsberger conducted many recordings, including some with trumpeterWynton Marsalis. Through his work as a conductor, author, and recording artist, Hunsberger helped further the principles of the wind ensemble concept, including "specified instrumentation, orchestral concept of performance, single performer approach [and] development of individual tone colors." From 1985-87, Hunsberger served as the president of the College Band Directors National Association.

Hunsberger has also arranged transcriptions of orchestral music for concert band. Among these include: Shostakovich's Festive Overture; Kabalevsky's Colas Breugnon Overture, Grafulla's Echoes of the 1860's, Khachaturian's Ballet Suite from Spartacus, and John Williams' Star Wars Trilogy. Hunsberger is also the editor for the Remington Warm Up Series. Hunsberger co-authored a book with Roy Ernst called The Art of Conducting, wrote a newsletter for MCA Music on Wind Ensemble Music, and many other articles. In 1994 he co-edited a book with Frank J. Cipolla called The Wind Ensemble and Its Repertoire: Essays on the Fortieth Anniversary of the Eastman Wind Ensemble. In recent years, Hunsberger has rescored music for silent films, and has conducted performances with major symphony orchestras. Hunsberger is currently conductor emeritus of the Eastman Wind Ensemble.