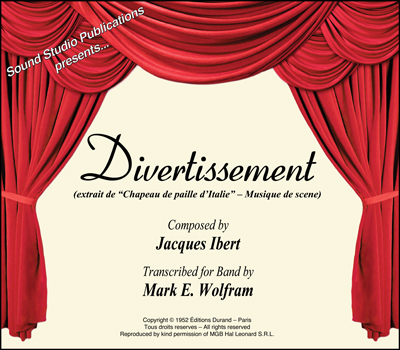 French composer Jacques François Antoine Ibert (August 15, 1890 - February 5, 1962) studied music from an early age. While a student at the Paris Conservatoire he won its top prize, and also won the Prix de Rome on his first attempt, despite having his studies interrupted by his service in World War I.

Ibert pursued a long and successful composing career, and is best remembered for his orchestral works including Divertissement (1930) and Escales (1922). As a composer, Ibert was often described as an eclectic. "Divertissement certainly embodies this moniker, with its tongue-in-cheek approach to the music -- embodying jazz age, vaudevillian and comic sensibilities among the serious composition and orchestration for the small chamber ensemble which appeared on stage. Ibert's music demonstrates that classical music doesn't always have to be serious.

Divertissement was composed in 1929 as incidental music for a stage presentation of Labiche's The Italian Straw Hat, a comical romp about a nervous bridegroom, his hungry horse (who eats part of the straw hat) and a philandering wife -- who's honor the bridegroom attempts to protect with misdirection and disguises -- in a series of screwball vignettes. The music, peppered throughout the play, relates to the various people with whom the woman's straw hat comes in contact.

This transcription for concert band incorporates the piano into the ensemble, adding just the right amount of pianistic flair and honky-tonk hokum. Ibert's use of dissonance is put to good effect as more of an "elbow in the ribs" than an aesthetic statement.