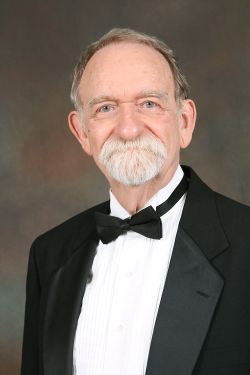 Dr. Goodwin taught composition and music theory and directed the jazz program (that he initiated) at the University of Texas for nine years before moving to the University of South Carolina (USC) School of Music in 1973 to serve as coordinator of composition, theory, and history. For several years he also conducted the USC Symphony. In 2000 he was named South Carolina Distinguished Professor Emeritus. He was the recipient of the prestigious USC Educational Foundation Award for Research in Humanities and Social Sciences in 1992 and was given the 1991 Kappa Kappa Psi National Distinguished Service to Music Medal for Instrumental Music Education. He has received several ASCAP (American Society of Composers, Authors, and Publishers) Awards in Composition. He is a creative and dedicated pedagogue whose former students hold prestigious teaching positions in South Carolina and across the country.

His other activities in the education field include public school concerts and clinics with his Quintet, lectures on various topics including careers in music, and directing the All-State High School Jazz Ensemble. Several times he judged and worked with students at the State Superintendent's Celebration of Arts and he has adjudicated artist, composition and song writing contests.

His compositions, in every style, jazz band to opera, jingle to film score, have been heard across the country and abroad. Goodwin has written hundreds of arrangements for the Carolina Marching Band and other groups across the country. He has also written extensively for choral groups. Dr. Goodwin is well known for his work with theaters as well; he wrote and served as musical director for over a dozen musical revues.

While his principal creative activity is composing, he is perhaps most visible as a performing musician. He has played trumpet, keyboards, string bass, and sung with orchestras (SC Philharmonic, etc.), chamber ensembles, church productions, and for such performers as Natalie Cole, Bob Hope, Johnny Mathis, and Billy Taylor. He leads the Dick Goodwin Quintet and Dick Goodwin Big Band, and is a Yamaha Artist.