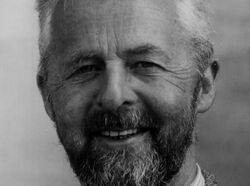 Declan Townsend (b. 1938, Tralee, County Kerry, Ireland) is an Irish composer and conductor.

Townsend has also worked as a string teacher, secondary school music master, adjudicator, author, and arranger. He was previously a member of the staff at the Cork School of Music and is currently music reviewer for The Irish Examiner.

Townsend's compositions are decidedly not avant-garde. They are unashamedly melodic, often with a Gaelic flavor and traditional harmonies. Most were written for choirs, instrumentalists and orchestras that he has taught. He loves writing for children, and has written dozens of arrangements for all sorts of instrumental groups.

His compositions have won prizes at the Cork International Choral Festival and have been performed in many countries including the Netherlands, Germany and the USA. He was awarded a Ph.D. for his study of the choral folk-song arrangements of Gustav Holst, Ralph Vaughan Williams, Zoltán Kodály, and Bela Bartok. He has completed commissions for the Cork School of Music, the Cork Chamber Orchestra, and the Cork Youth Orchestra, and his arrangements of traditional Irish material have been published in the UK and Germany.