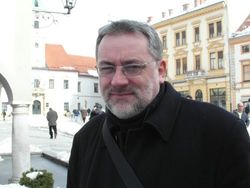 Davor Bobić (b. 1968, Varaždin, Croatia) is a Croatian composer.

Bobić finished elementary and secondary music school, as well as comprehensive (high) school in his native Varaždin. Graduated in composition, music theory and classical accordion from the famous State conservatory "P. I. Tchaikovsky" in Kiev. Awarded by Ukrainian Ministry of Education as one of the best foreign students in the academic year 1992/93.

After returning to his homeland in 1996, he founded a composition class at the Music school in Varaždin for elementary and secondary education that is unique in the Republic of Croatia.

Winner of Ivo Vuljević award for the most successful young Croatian music artist - the only composer so far to receive that award. 1998. Winner of Stjepan Šulek award for the best orchestral accomplishment by a young Croatian composer, as well as the Award of the Varaždin county for exceptional cultural achievements. 1997. Winner of the Croatian Wattle Order medal in 1999. He received the Danica hrvatska order medal with the figure of Marko Marulić in 1999.

Bobić became the principal of the cultural public institute of Concert office Varaždinin 2003, and became assistant lecturer and a guest professor at the Art Academy in Osijek in 2008.

In 1979, as an eleven-year old boy, he performed as a member of the children's choir in the performance of J.S.Bach's St. Matthew Passion at the Varaždin Baroque Evenings festival; that performance left a lasting mark in his creative evocation concentrated in the writing of his major oratoriums. He wrote more than 120 compositions ranging from piano miniatures to large vocal-symphonic works. His works are performed by leading Croatian and foreign musicians, ensembles and orchestras. He regularly attends the performances of his works at all the prestigious festivals in the country. His extensive body of work is a constituent element of teaching material at the prestigious universities in London, Helsinki, Kiyev, Minsk, Zagreb and Osijek, and his works are performed all over the world. He gained the attention of cultural public with his oratorium King Tomislav, while the performance of Vukovar Requiem in 2004 was pronounced to be one of the main musical events of the season. He has also received the prestigious Boris Papandopulo award.

Bobić has been a member of the Croatian Composers Society since 1994. With the Lado ensemble and choreographer Dinko Bogdanić, he set up a ballet with singing parts called Veronika Desinićka thus completing a sort of national trilogy, which achieved extraordinary success.

The new oratorium Isaac is one of the central cultural projects in 2009 as part of celebrating the city of Pecs as a cultural capital of Europe. Davor Bobić's opus for classical accordion created in the period of last fifteen years is considered a landmark contribution in the enrichment of Croatian and European literature for that instrument.