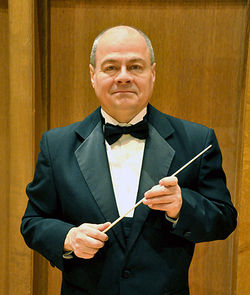 David Mitchell Mruzek (b. 3 May 1961, Trenton, Mich.) is an American composer, conductor and educator.

Dr. Mruzek earned a Bachelor of Music Education degree from the University of Toledo and Master of Arts and doctorate in music history degrees from the Ohio State University. For his doctoral dissertation on The Warriors of Percy Grainger, Mruzek was awarded the Grainger Medallion from the International Percy Grainger Society.

Mruzek was a member of the 122nd Army Band of the Ohio National Guard, where he was principal clarinetist and librarian. He began his teaching career as director of music at St. Francis de Sales High School in Toledo. He also taught at Ohio State University, Columbus State Community College, Colby Community College, and since 2006 has served as associate professor and director of instrumental music at Hanover (Indiana) College.

Mruzek is also a composer of original works for concert band, with more than 30 works to his credit. In 2009, his method book Contemporary Rhythm Drills for Band and Orchestra was published Kjos Music. His compositions have been performed by numerous ensembles, including the United States Military Academy Band, the Indiana Wind Symphony, the Angelo State University Symphonic Band and the Ohio State University Concert Band. Three of his works are published, including Early One Morning March, Boy Scout Centennial and Apollo Anniversary.

Actively involved in the Boy Scouts of America, in July 2005 and 2010, Mruzek served as the assistant band director for the National Boy Scout Jamboree held at Fort A.P. Hill in Virginia. He has written four band compositions to honor the Boys Scouts: Boy Scout Centennial, Order of the Arrow, The Eagle Scouter and Camp Louis Ernst.