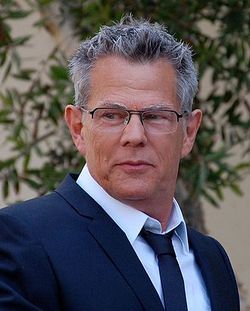 David Walter Foster, OC, OBC (b. 1 November 1949, Vancouver, B.C.), is a Canadian musician, record producer, composer, songwriter, and arranger. He has been a producer for many successful musical artists and has won 16 Grammy Awards from 47 nominations. Foster is the current Chairman of Verve Music Group.

Foster was a keyboardist for the pop group Skylark, discovered by Eirik Wangberg. Together with Jay Graydon he formed the band Airplay, whose album of the same name is often labeled as important within the west coast AOR genre.

Foster was a major contributor to the 1979 Earth, Wind and Fire album I Am, both as a studio player and arranger, as well as being a co-writer on six of the album's tracks, the most noteworthy being the song After the Love Has Gone for which Foster, and his co-writers Jay Graydon and Bill Champlin, won the 1980 Grammy Award for Best R&B Song.

Foster worked as an album producer on albums for The Tubes and Boz Scaggs,and was also a major contributor to the band Chicago's resurgence in the early and middle 1980s. In 1985, Rolling Stone magazine named Foster the "master of ... bombastic pop kitsch". That year, Foster composed the score for the film St. Elmo's Fire, including the instrumental Love Theme from St. Elmo's Fire.

Foster composed Winter Games, the theme song for 1988 Winter Olympics in Calgary, Alberta, and, along with Kenneth "Babyface" Edmonds, composed The Power of the Dream, the official song of the 1996 Summer Olympics.

In 1995, Foster signed a deal with Warner Brothers that enabled him to set up his own boutique label, 143 Records, as a joint venture with Warner. By 1997, Foster had come to the realization that, in the American market at least, "logo labels" like 143 were in a "bad spot" and, as a result, Foster sold the label back to Warner and became a senior vice-president at the corporation.

In 2005, Foster, his daughter Amy Foster-Gillies, and Beyonce Knowles wrote Stand Up For Love as the anthem to the World Children's Day, an annual worldwide event to raise awareness and funds for children's causes.