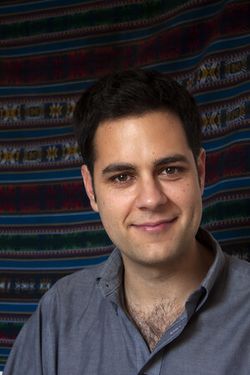 Daniel Cueto (b. 1986, Lima, Peru) is a Peruvian composer and flautist.

Having studied and worked in Germany for many years, Cueto fulfilled commissions for such institutions as Deutschlandradio, the Musikschule Bonn, the KHM Köln and the Robert-Schumann University Düsseldorf, and served as a member of the jury in the 29th Composition Competition of the City of Siegburg. His strong affinity for teaching led him to become an associate lecturer at the Detmold University of Music and at the Cologne University of Music and Dance from 2016 to 2019.

Cueto came to the United States in 2019 to begin work on a Doctor of Composition degree at Indiana University, where he is currently [2021] studying with composer Don Freund. Since his arrival, he has been commissioned by several American musicians and institutions, including the International Double Reed Society, the PanAmerican Trio and Azusa Pacific University. He was recently named the winner of the Columbus Symphony Orchestra´s Inaugural Composition Competition (Columbus, Ind).

Daniel Cueto´s work is reflective of his broad cultural experiences within European, North American and South American music. His compositions have been described as “cleverly melding rich traditional Peruvian melodies and rhythms with a contemporary flair, creating a style that is both pleasing and accessible to the listener and performer”. To date, his works have been performed in eighteen countries, including Germany, France, Spain, Norway, Malta, Argentina, Brazil and the USA.

In counterpoint to his work as composer and educator, Daniel is an accomplished flute player who is active in a wide array of projects. He has performed solo, chamber and orchestral concerts in nine countries, including Germany, Holland, Latvia, Lithuania, Spain and the USA. He has appeared as concerto soloist four times with two Peruvian orchestras, the most recent highlight being the premiere of his own Flute Concerto No. 1 “Tale of the Chimú” with the Trujillo Symphony in August 2019.