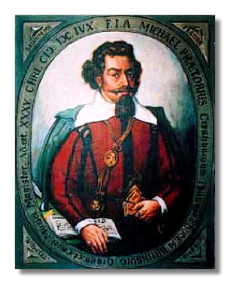 Terpsichore is a collection of 312 pieces (mainly French dances) published by Michael Praetorius in 1612. Although Praetorius composed many original works, he did not compose the pieces in Terpsichore. He learned these dances from dancing masters while he was working as Kapellmeister at the court of Wolfenbuttel and compiled them as examples of good four, five, and six-part writing. Praetorius has planned to produce a series of collections of secular music named after Greek muses, but Terpsichore, the goddess of dance, was the only one that was ultimately published.

Ballets at this time were performed n the Great Hall with the royal family seated on a raised platform at one end and spectators in galleries on three sides. Since much of the audience saw the dance from above, the choreography emphasized elaborate floor patterns created by groups of dancers. The lavish costumes, elegant scenery and intricate effects emphasized the fact that the dance was designed for the entertainment of the aristocracy.

The Courant (Leaping Dance) first appeared in 16th century French music. In his Orchesographie, Arbeau describes these early dances as having jumping movements with much of the figuration improvised. Although some of the later Courants or "running dances" consisted of may continuous flowing notes, the rhythmic variety and a definite hop of Leaping Dance is very typical of the early French version. A Courante such as this may have been performed during courtship as a way of "showing off" in typical Renaissance fashion. This piece was most likely originally performed by violin band.