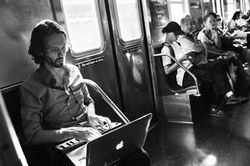 D. Clock Dance was commissioned by my ever-patient former music education teacher and mentor Dr. Kirt Saville, in January 2016. I wrote most of it directly into my notation software on my laptop while riding the subway to and from my teaching job or gigs.

I was sad and angry about many things going on in the world and in my life when I started this piece, and I decided to play with this idea of a downward spiral by crafting a melody that begins in 13/8 with each subsequent measure losing an 8th note until it concludes on a 1/8 measure. I eventually moved the bar lines to make it readable.

The “D” in D. Clock Dance stands for “Doomsday”, and references the Doomsday Clock established by the Bulletin of the Atomic Scientists in 1947, representing the likelihood of a man-made global catastrophe (which would occur at the hypothetical midnight on this clock). Originally it only reflected the likelihood of global nuclear war, but since 2007 it has also reflected the threat of climate change and other new developments in the sciences and technology that could inflict irrevocable harm to humanity. As of March 2018, the clock is set at two minutes to midnight.

This piece is mournful at times, but has a sense of optimism that manages to escape the frustration that I began it with. One of my younger sisters passed away unexpectedly in July 2016, and when I got back to the piece it took on an even greater therapeutic role in my life. I finally finished it in the summer of 2017 during visits to the park across the street from our apartment building in northern Manhattan. I would compose for a few minutes at a time while I tried to keep an eye on my two boys as they joyfully rode their bikes, climbed, played with sticks and dug for pirates’ treasure in the dirt.

The piece was inspired by the Doomsday Clock and illustrates the approaching countdown through Ashton's use of diminishing asymmetrical meters. This is programmatic music that is meant to empower our ability to perceive our world and our place in it through the power of music.